I’m always looking for ways to keep myself organized. As a visual person (love whiteboards, hate spreadsheets), I want my stuff organized the way my mind works; stuff grouped, stuff color-coded, and stuff always right there in my peripheral vision.

My desk is laid out like this. I stack bills and personal stuff in one corner, my notebook, pen and drawings at my right hand side, my computer and keyboard in the middle, and my phone, keys and spare change at the top right. I can see everything with one glance at my desktop and then quickly transition to one of the areas of my desk to keep moving along productively. Others might think it’s unorganized, but to me, it’s the most efficient state possible. 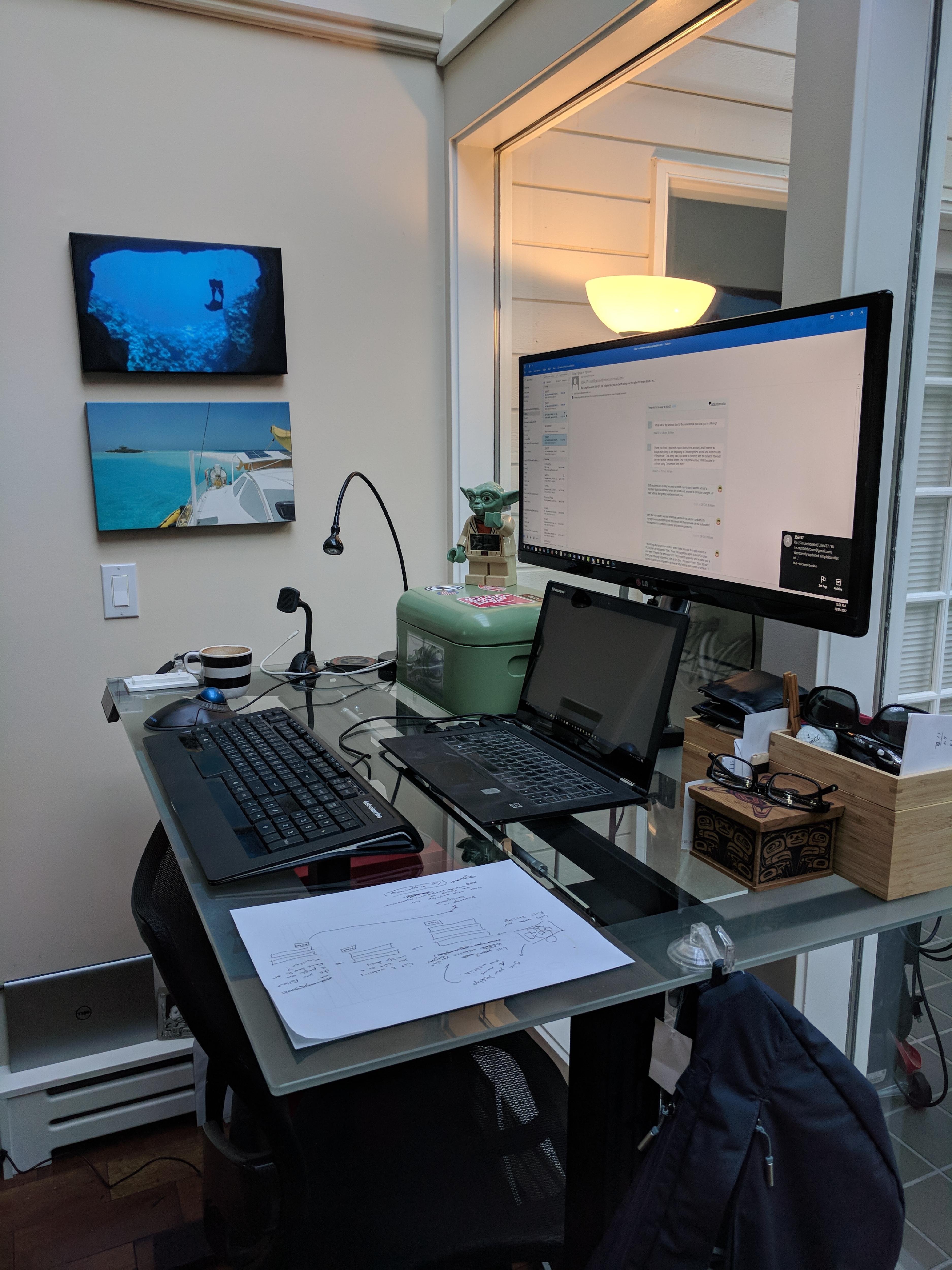 (yep, it’s even one of those awesome standup desks from Autonomous.ai)

I’ve tried a lot of different web based tools to carry the same experience into my digital life. Evernote, OneNote, Google Keep, Dropbox, Pinterest, Samepage, and so on. But nothing ever stuck. They were either too complicated or didn’t capture enough of the important stuff I rely on everyday (some were more team collaboration based, others wanted to store and organize my stuff their way, and even others were just too complicated to be quick). Plus a lot of them want you to work inside them, not just as a launch pad to get my real work done.

Middlespot is engineered to be the tool that you glance at and subsequently launches you out and onto your next task.

When we got down to designing middlespot, we all agreed it had to have the following characteristics:

Open on any device

First, we knew it had to be web based. That way we could open it on any device with a modern browser. Every desktop is unique, with it’s own unique web address. Now, no matter where I am and what device I’m using, I can access all the stuff I’ve put on my desktop (even with my wife’s phone or kid’s ipad).

Notes and To Dos

There are lots of great note taking tools and to do lists out there. But we just wanted one right on our desktop. So we built the simplest notes and to do list tools we could think. They don’t do anything fancy, just the same thing you get in a paper notebook.

That was easy. No folders and clicking to get to your stuff. It would all be there so it needed to be on a single webpage. No reloading.

This was another one that wasn’t too hard. Every piece of content should be represented by a thumbnail of the original, not just some text. And that thumbnail should scale to any size I want so I could tell what it was.

A freeform interface that would be flat and visual.

We wanted something intuitive, familiar, flat, and visual. So we landed on a cartesian plane (a map). But instead of having cities and streets and landmarks, our map would be populated with your important stuff. So you’d pin your stuff anywhere on this cartesian plane, then zoom out to see more of your stuff and zoom in to see stuff close up. Closer in you get to see the details, zoomed out you see the big picture.

This also opened up the possibilities of movement around your desktop of stuff. We didn’t need to restrict you to an up/down single dimension of placing your stuff. Now you could move up/down/left/right without limit. This is especially great on a touch device where you can pan around just like a map.

Now, when you organize your stuff, you can group and cluster these thumbnails into the piles you find useful. Zoom in to use some and then pan over to another cluster to use other similar resources.

Yes, you can have multiple desktops (I use two all throughout the day, and then I have 3 others that I stuff resources around a specific topic), but I tend to just use the one, get a resource, and away I go. This keeps with the spirit of the middlespot desktop as a tool to get other work done, not a place you actually do your work.

This one was important. We didn’t want to maintain and store all of these files and passwords for everyone on our systems. We just didn’t have the confidence we would have the resources to build a secure enough system to store the important files and log in information for stuff you find important enough to use everyday. Sure, bookmarks and links aren’t a big deal, but documents, images, and more are.

So we decided to use the services of a cloud drive provider to make it work. You guessed it, we chose Google Drive and Google Single Sign On. This gave us some amazing benefits.

Second, this means that when you put any document, file, spreadsheet, photo, or video onto your middlespot desktop, it’s stored on your google drive. It never sits on our servers. So you have complete control of the file. Just go to google drive and you’ll see a folder called middlespot. You can drop files into it and they will appear on your desktop. Remove something and its off your desktop. Your middlespot desktop and your desktop folder in your google drive are sync’d, with all content like files, photos, and videos residing in your drive.

What was so interesting and terrific about this is that even we can’t view your desktop without your google username and password, which we never see. So even if you wanted us to, we can’t see what you’ve got on your desktop (unless you’ve made it public ;)).

Where we go from here

We opened middlespot up to anyone slowly over the last year, and we’ve had some really great feedback and wow, some really committed users. It’s not for everyone, but for those it is, we can see from our analytics that they also use their desktops multiple times everyday. If it works for you, it really works!

With that in mind, our goal is to keep running it as a free app that anyone can use. We’ll keep it supported by a very small desktop sponsor advert that doesn’t get in the way of you getting things done. Give it a try and let us know how it works for you. And stay tuned, as we continue to roll out new features to make it even better.